The Basics of Corrosion Control 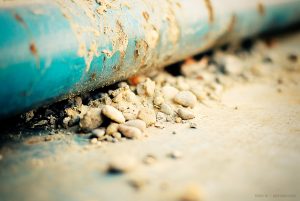 While corrosion is a common problem, it requires a very specific set of conditions to occur. Corrosion happens when elements in a system’s water are corrosive.

Water that is corrosive is known as unstable or aggressive. In unstable water, corrosive elements are highly concentrated, which results in rust and excess calcium carbonate scale and deposits.

Water that does not result in high levels of corrosion is known as stable. In stable water, corrosive elements are much fewer, so corrosion doesn’t occur at such a rapid rate.

To control corrosion, water treatment professionals seek to make water more stable so it doesn’t corrode or rust pipes and tanks. While there are many types of water on the scale between stable and aggressive, things such as pH, hardness, and alkalinity all influence the level of corrosion water will cause. Here are some of the main factors that result in corrosion.

As a general rule, water with a pH that is too high or too low will form scales or corrosion, as will water with the incorrect alkalinity balance. The presence of additional compounds such as carbon dioxide, dissolved solids, and even oxygen also influence the hardness of water. When water has a high concentration of dissolved oxygen, for example, it becomes corrosive. This is also true for water with high levels of compounds such as chlorine and nitrates.

While dissolvable compounds play a significant role in the corrosiveness of water, you also need to pay careful attention to the water temperature. As a general rule, higher temperatures result in more rapid corrosion, and this is a major consideration for water treatment professionals looking to cut down on corrosion.

It’s important to remember, however, that the effect of temperature on water corrosion isn’t always as simple as it seems. In some cases, hot water temperatures can make calcium carbonate in water less soluble, which slows down the pace of corrosion.

Water temperatures can also have drastic influences on which types of corrosion take place. Hot water generally results in more uniform corrosion, which is less damaging than the spotty corrosion caused by cooler water temperatures.

Just as water temperature and dissolvable compounds in the water influence corrosion, so does the water’s flow velocity. In systems that use moderate flow rates, water flows through pipes without breaking off tubercles that have formed, which is ideal.

In systems with lower flow velocities, however, corrosion increases thanks to high levels of oxygen in the water. At rapid flow velocities, the pressure of the water itself can eat away at the pipe without causing any corrosion at all. Because of this, it’s optimal for water systems to implement moderate flow rates if possible.

The Presence of Bacteria

One of the final things that influence the rate of corrosion is the presence of bacteria in the water. Bacteria are known to cause corrosion, but they can also accelerate existing corrosion. When bacteria form on the walls of pipes, they speed up the rate of corrosion by concentrating the oxygen cells into a narrow area. This, in turn, results in pitting and tubercles. Additionally, bacteria release carbon dioxide, which can interact with water to promote corrosion.

The elements of corrosion control are complex. In addition to managing bacteria, soluble compounds, and temperature levels, water system experts must also regulate flow rates and a variety of other complicated considerations to keep water treatment systems in corrosion-resistant, working order.

For more information on corrosion control in Texas and solutions available from AOS Treatment Solutions, please contact us today.